For years, I was a huge iTunes user. It was the best music player available but it certainly did have its issues. When Spotify started to gain traction, I was wary of switching to the service for a few reasons. How could I accumulate a library of music if I didn’t actually own the music? Or what if I’m not connected to the Internet? But as my roommate continued to rave about Spotify, I decided I had to jump in and just try it out.

And you know what? I love Spotify. Every concern I had was quickly answered because they have thought of everything. Want to have music while you’re out of cell range? No worries, you can download playlists straight to your phone or computer. Want to listen to a brand-new remix that isn’t on Spotify? Loading and listening to local / custom files is easy. And that is just the simple stuff. If you know anyone who uses Spotify, I’m sure you’ve heard a similar raving review. But if you’re still not convinced, here is why I think you should at least consider trying Spotify Premium.

Of course you’ve heard that Spotify has lots of songs available, which isn’t necessarily jaw-dropping. But when you compare it to Spotify’s competitors, 30-million songs is a hell of a lot for $10 / month (or $5 / month if you’re a student). For $10 on iTunes, you get 7 - 10 songs a month. But maybe you’re considering about getting more than 10 songs a month in a less, perhaps, legal way. That might work until you get a cease and desist e-mail for a lot more than $10. So at the end of the day, 30-million songs for $10 / month is a might fine deal.

Apple seems very proud of their cross-syncing platform iCloud and to be honest, it is pretty good. But iCloud doesn’t even compare to Spotify’s syncing across their different platforms. If you’re listening to a song on your computer and you add it to your library, it shows up on your phone that instant. And you can literally swap over to your phone that instant, picking up that song exactly where you left it off. In fact you can do this across the desktop, browser, and phone apps without even missing a beat. I just switched from my phone to my computer after I came back from a walk and wanted to pick up the song exactly where I was. It’s a feature I’ve dreamed of for years and now it’s my reality, thanks to Spotify. As far as I know, iCloud or any other competitor can’t even come close to that.

Swap between your phone and your computer instantly

In my opinion, the crown jewel of Spotify has to be their mobile app. If you’re a premium user, you get the same unlimited music access on your phone that you would in the desktop app. That means you get the ability to search through Spotify’s whole catalog, browse artist updates, and sample and queue up songs (a lot of which is still not doable on the iTunes equivalent app). In order to do all this, Spotify didn’t waste any space as they crammed all the functionality into a cohesive, absolutely gorgeous mobile app. You’re really not using Spotify until you’re using the mobile version. 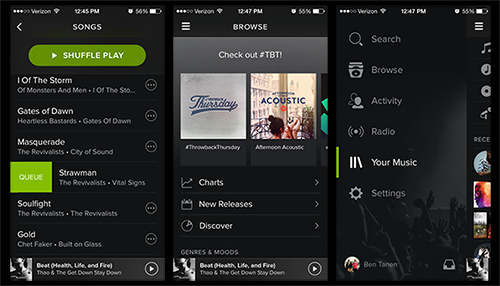 Spotify didn't waste an inch of space on the mobile app

You can build the best music library through suggestions from real people, everyone knows that. Spotify has certainly taken this into account since one of their main focuses is making the music experience social. They do this in a few ways, but the most obvious two are social sidebar and collaborative playlists. Do you have that hip friend who has that shockingly good taste in music and always finds new stuff? If you follow them, Spotify will show you what music they are listening to at that moment through the social sidebar. You can even click on the song and start listening along. Want to go on a road trip with this friend and collaborate on a playlist? It’s super easy to share songs and make the best-of-the-best for a playlist. The social music experience is one of Spotify’s key elements and they do it quite well.

One of the best qualities of a good software system is the ability to change and adapt. Apple has always succeeded at looking ahead at the grander picture, generally answering questions that haven’t been asked yet. But there were often requests that were left unanswered because they weren’t innovative enough. On the other hand, Spotify looks to embrace all of these changes. Spotify consistently pushes a new update every week or two (and all you have to do to update is press “restart”). While some changes that they make in updates aren’t groundbreaking or even noticeable, there certainly are updates / changes that do answer requests even if they are small. An example being that in one of the more recent updates, Spotify enabled the ability to search inside a specific playlist. This wasn’t a huge change (iTunes has had it for awhile), but it was a direct response to a user request because Spotify takes these requests and suggestions seriously, which is seriously cool. This means that while the software is being managed by the company, the trend and changes of Spotify can partially be set by the customers who use Spotify.

There are hundreds of different reasons to maybe choose Spotify over iTunes (or other streaming services) or vice versa. All I can claim is that these are why I switched to Spotify from iTunes after 10 years and I’ve never once looked back.