This retro post came from my senior year of high school when I was taking AP Economics. Who doesn’t love turning economics into drinking games?

In my AP Economics class, we have started discussing game theory. This is the study of different behaviors in economic “games”. The most basic game is between two firms, or actors, playing together, and they have two options, for which each firm will pick the option that will give them the best output.

Eventually, my teacher showed us a clip from a game show that uses the concepts of game theory. The show, called Golden Balls, pits two players against each other to win a pot of money. If they both choose to split the money, they will share the pot 50/50. If one chooses to steal the money while the other splits, the stealer will win all of the money, while the other is left with zero. Finally, if they both chose to steal, everyone ends up with zero.

After watching the clip, my classmates and I felt the need to design our own version of the game. However, as a fairly poor teenager, I felt the prize shouldn’t be monetary. And then we came to our dilemma. What to make the prize? 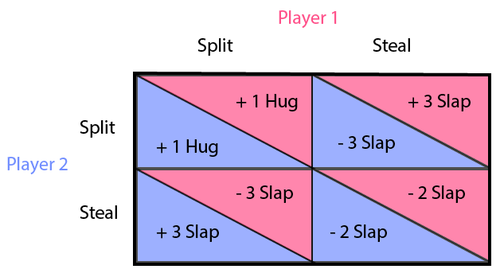 This game/version relies on the idea that both players want to slap the other person, so I guess this would preferably be played with an enemy (or a close friend).

Another version turns game theory into a drinking game. To play this version, you would need to find an alcoholic beverage of which both players dislike and a few beers. This time having the option to make the other player either drink or sit, punishments would be dealt out as shots of the collectively despised liquor. A drink/drink situation would result in both parties taking a shot. A drink/sit situation would lead to one party (the one who chose sit) to take a shot, while the other does not. The ideal situation, however, is for both parties to choose sit, resulting in both parties sitting and enjoying a beer together. 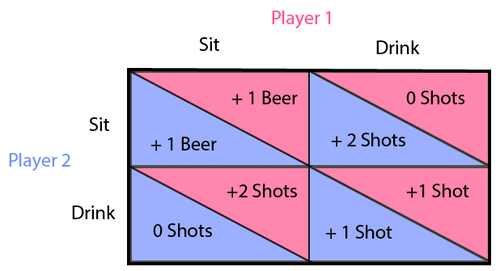 Eventually, I’d assume both parties would be drunk enough to lose track of the dilemma and implications of their choices, but I imagine that this game would serve as an interesting way to get drunk for economists.