After posting my two most recent retro posts (#1, #2), I thought I’d post some of my older projects as well. When I was learning Python, I sort of had a fascination with making games as can be seen by most of these projects.

The first coding project was Battleship. This was based on the project that Codacademy had you build as you learned Python. This version is more extended than the Codacademy, but to be honest, without looking back at the Codacademy version, I’m not sure how or why… Either way, here is the code on Github. 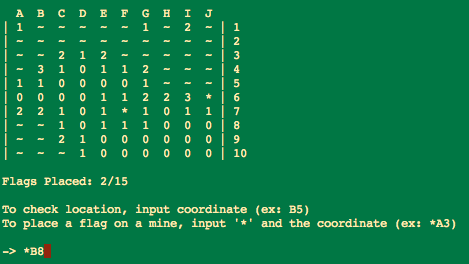 This next project was my first original game, Minesweeper! It was built very much like Battleship but the logic was a little more complicated. As you can see, it’s not expertly written since this was after like a month of knowing Python. I might consider re-writting / refactoring the code not that I’m a tad more experienced. Here is the original code on GH.

A year later than my other games, I decided to build a blackjack game. This was made with the knowledge of classes so I decided to go down that route instead of a constant single chunk of code (see other games). It’s not much better written, but it does include the ability to “count cards” which is cool. Again, here’s the code.

Update: And because I was bored, I also threw in some better versions of the first two games with some serious refactoring / feature improvement into the repo. Minesweeper reveals sections of 0s now! I noticed I was also doing some weird sort of logical boolean using a string of spaces. It was weird. I took it out. It’s better now.

If you’re at all interested, give them a play and maybe even play around with the code. I did make them, but I have to say “objectively” I think they’re pretty fun.