On Sunday, Parasite made history as the first foreign language film to win the highly coveted Best Picture award at this year’s Academy Awards. The film is a magnificent achievement and was, in my opinion, the right choice. However, in the weeks leading up to the ceremony, it was highly speculated that Parasite would lose to 1917, even though most critics believed Parasite was the superior movie. All of this was also coming a year after Green Book won over (believed to be) superior films like Roma, The Favourite, and BlackKlansman. Needless to say, before Parasite actually won, there were low hopes that the Academy would make the best choice. 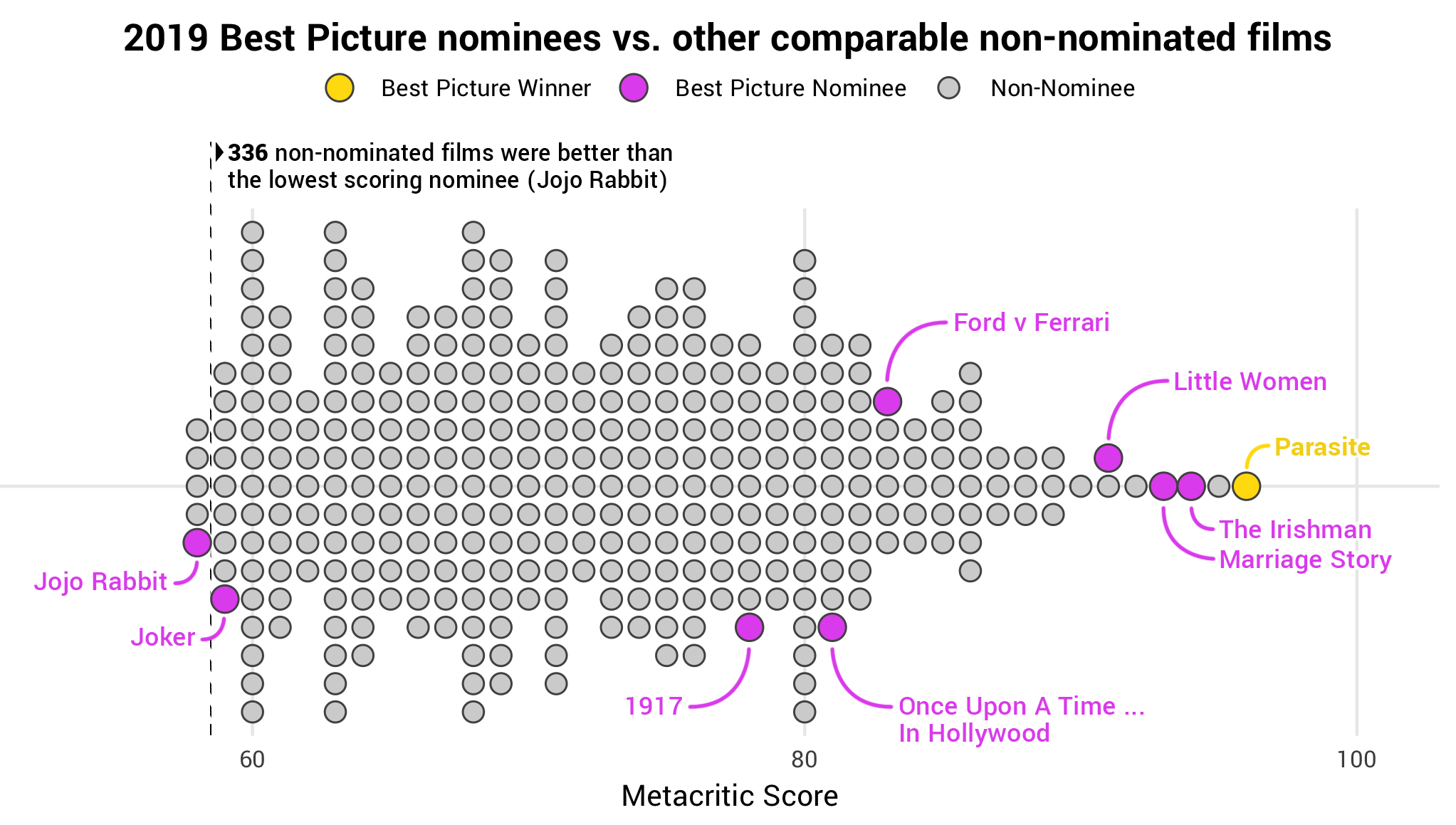 Beyond the discussion of which Best Picture nominee was most deserving of the prize, many have pointed out that the Academy’s shortlist of films did not even include some of the best films of the year. Films like Uncut Gems, The Farewell, and Dolemite Is My Name were all notoriously snubbed this year, though this has become somewhat of the norm at the Oscars.

In an attempt to quantify all of this and mentally prepare myself for what I expected was going to be a loss for Parasite, midway through the Awards, I tweeted a series of charts showing the Best Picture nominees from the past few years stacked up against other comparable non-nominated films. These showed how many great films the Academy had overlooked when they made their nominations and how the eventual winners compared to those overlooked films. Though never perfect, it was clear that the Academy does a better job in some years than others. In 2016, though some of the nominees were worse than other non-nominated films, Moonlight was considered the best of the best and won the prize to prove it. On the other hand, in 2018, nominees like Bohemian Rhapsody and Vice were far inferior to many, many other non-nominees, which was only made worse by the fact that Green Book was generally considered one of the worst nominees that year.

Now that we have the benefit of knowing who won Best Picture, this year’s Best Picture category looked a bit like a mix of 2016 and 2018 - the best film won the big prize but many great films weren’t nominated. Most people can now rest easy knowing a worthy movie won but it’s worth remembering all those great movies that did not get the recognition they deserved, this year and in years past. For those curious, see below for a full breakdown of the Best Picture nominees and other (often better) non-nominated films from the past 20 years as well as a few of my top (mildly data-driven, mildly personal) picks. See you all again in 11 months when the rage cycle starts all over again!

Some films on Metacritic's list likely did not qualify for Best Picture nominations (e.g., Apocalypse Now: Final Cut, an extended version of the 1979 film, was released in 2019 but likely would not qualify). However, the Academy's qualifications have changed over time and generally require information submitted by studios directly to the Academy, which can be difficult to find online. Therefore, for the sake of completeness, all films listed on Metacritic were included.

The film's year indicates the year of release, not the year of the Oscars ceremony associated with the film.