Update (Apr 08, 2020): Bernie Sanders is dropping out of the Democratic Primary, leaving Joe Biden as the sole candidate and now the presumptive Democratic nominee. As a result, this project is now no longer relevant, so I’m going to freeze it for now.

On March 17, Arizona, Florida, and Illinois each held their respective 2020 primaries elections. These state primaries marked the halfway point in this ongoing national primary since now more than 50% of the initial 3,979 delegates have been awarded across 30 different state contests. As of writing this, Joe Biden leads the race with 1,215 delegates while Bernie Sanders trails behind at 909 delegates. Given these current counts and the outlook for upcoming primaries, many outlets have called Biden’s lead (nearly) insurmountable. In the lead up to Super Tuesday (March 3), Biden’s path to victory was not so clear and it actually seemed like Sanders might end up winning the nomination after he had relatively strong performances in early states like Nevada and Iowa. But at the end of the day, Biden was able to through in many of the big states that mattered and here we are. 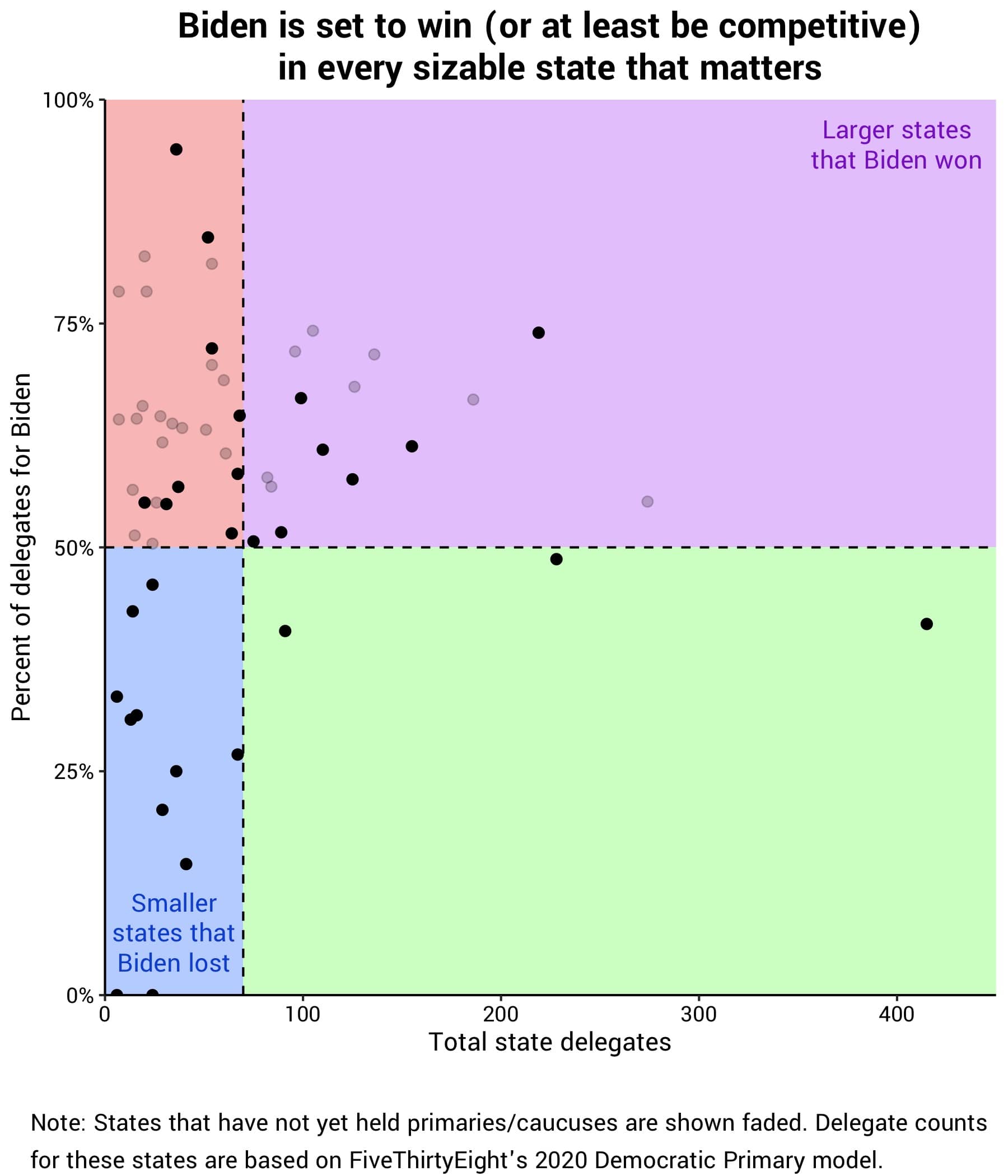 If you have been following this election closely, Biden’s leading position is not all that surprising. But because this primary process is almost unbearably long, it can sometimes be hard to piece together all of the states that brought Biden and Sanders to the delegate totals that they have as well as the states that will likely help Biden secure the nomination. Thus, to help illustrate the bigger picture of these primaries, I present a visualization of all 3,979 of the delegates up for grabs, where they have gone thus far, and where they are projected to go in upcoming states.

This race is not yet over (though I agree it is almost nearly over) so I will continue to update the below as new results and projections become available. Ongoing developments with Trump and COVID-19 will almost certainly throw some (more) curveballs so we will see how that may change things.

I hope everyone is staying safe and healthy. And remember to wash your hands.

Delegates won (or projected to be won) by Biden, Sanders, and Other Candidates

States are organized from top to bottom by date of primary/caucus and then alphabetically. Dates for primaries and caucuses come from NPR. Due to concerns around the COVID-19, multiple states (e.g., Ohio, Conecticut) have postponed their original dates. The most recent proposed postponement date is shown.

Delegate counts from states that have held primaries/caucuses come from the Associated Press.

Projected results for upcoming states come from FiveThirtyEight's 2020 Democratic Primary model, where the average forecasted pleged delegate totals were used. For instances where the combined average number of pleged delegates for each candidate did not equal the total number of delegates available in a state, the remaining unallocated delegates were assigned proportionally.